Here we will present the food tree of life using phylogenetic trees . This section is meant to be complementary to the outline view of the food plant tree of life, which contains more plant taxonomic information than can fit on the trees and will contain links to our blog posts about species in our list.

Phylogenetic trees illustrate the relationships among taxa (a group of biological entities at any level in the taxonomic hierarchy) and the relative order of speciation events. Before we discuss the placement of our food plants on the phylogeny of all plants, we will provide a brief primer on how to read phylogenetic trees, such as these two trees representing relationships among some of the food species in the Asteraceae family (the sunflower family):

Branch points on the tree are called nodes, which represent speciation events, the separation of one group of organisms from the rest. Taxa that are connected by a single branch point are sister taxa.  All the descendants from a particular node form a clade.  The more nodes separating two taxa, the more distantly related they are.  Sometimes the branches of the tree are drawn to scale to reflect the age of the nodes, but usually—and here on this page–they are not.  The length of the branches and the arrangement of taxa names on the pages are chosen for convenience or arbitrarily. Thus, the two trees in the example above (Tree 1 and Tree 2) represent the same evolutionary history.  The two trees are simply drawn differently.

Here is a very broad phylogenetic tree view of the components of the human diet–plants, animals, fungi and seaweeds (tree topology from from the Tree of Life web project):

Tree of life of human edibles (all eukaryotes)

Notice that fungi (includes mushrooms) are much more closely related to animals than they are to plants. Also notice that three of the common edible seaweeds (kelp, nori and sea lettuce) are in vastly different parts of the tree, only distantly related to one another.  Of the three seaweeds on the tree (only one representative species per clade is shown on the tree for readability), only sea lettuce (Ulva sp.), a green alga, is in the group we call plants, the kingdom Plantae.  In fact, taxonomists currently believe the land plants emerged from green algal ancestors.  Nori (Porphyra sp.) is a red alga (Rhodophyta), while kelp (Saccharina sp.) is a brown alga (Phaeophyceae).  In this blog we will at some point likely discuss the fascinating biology and culinary delights of mushrooms and their fungal allies and the seaweeds because these organisms are often culinarily grouped with plants.  For now, however, we want you to note that fungi and the brown and red algae are biologically most certainly not plants.  This blog, like the plants in the human diet, will focus on the land plants or higher plants, the group botanists call the embryophytes. The phylogenetic tree below contains the major clades containing plant species humans eat, with one food species representing the clade at the tips of the phylogeny and the botanical name for the clade labeled on the branches of the tree (tree topology provided in September 2012 by the ever-expanding master phylogeny of all plants stitched together by the fine folks at Phylomatic, who frequently add published phylogenies of smaller clades to their master tree and provide a web application to prune their master tree down to only include a list of species provided by the user):

The major clades on the tree are not equally represented in the human diet. Like the diversity of plants on the planet, our diet is heavily skewed toward the more recently derived angiosperms–the monocots and eudicots.  Of the oldest clade on the embryophyte tree–the bryophytes, ferns and fern allies–the group of plants that split from the aquatic green algal ancestor and began the colonization of land, our diet only occasionally includes a few species of ferns, eaten in their early expanding “fiddleneck” stage. The next oldest major clade, the gymnosperms, the first seed plants, supplanted the bryophytes and ferns for dominance on the planet starting around 300 million years ago and reigned until the angiosperms diversified and surpassed them for diversity and geographic dominance around 100 million years ago.  The 700-900 species of extant gymnosperms, most of which are coniferous trees and shrubs, constitute less than 1% of modern plant species diversity and are the last representatives of a clade that has seen its golden age on the planet pass.  Of those modern gymnosperms, our diet includes only pine nuts, juniper berries, the odd spruce or pine needle tip, cycad nuts for the Chamorros people of Guam, and leaves and nuts of Gingko biloba, the last surviving species of a once mighty genus saved from oblivion by the effort of Chinese monks over the last several thousand years.

The early evolution of angiosperms is still a bit murky, but we do know from the fossil record that the diversity of the flowering plants exploded 100 million years ago, likely aided in their march across the planet by the insects and other animals that pollinate the flowers and disperse the seeds of many angiosperm species. The extant species from earliest (“basal”) angiosperm clades–the austrobaileyales and magnoliids– in our diet are primarily to be found in our spice cabinets (and guacamole!), shown here with pine as the gymnosperm outgroup–the closest relative to the group of primary focus in the tree–to the basal angiosperms:

Basal angiosperms in the human diet

The “starburst” of species all originating from the Laureles order node on the tree is called a polytomy, a clade of unresolved phylogenetic relationships.  Our best guess so far is that all of those species in the polytomy belong in the Lauraceae family, but within the Lauraceae the relationships are unclear at present.

The next big evolutionary divergence in plants after the evolution of the early angiosperms was the splitting off of the monocots from the rest of the angiosperms, creating the two most recent major clades of angiosperms:  the monocots and eudicots. The monocots are a large clade, accounting for about 18% of known plant diversity. As the clade containing the grass family, the Poaceae, which boasts the grains wheat, rice, corn, rye, barley, oat, sorghum, wild rice, and millet, the monocots arguably constitute the most nutritionally important clade on the planet.  The monocots also contain the plants with the biggest and smallest seeds on the planet–the palms and orchids, respectively, represented on the tree by coconut (a palm) and vanilla (an orchid).  The major monocots in the modern human diet are on the tree below, with the avocado as an early angiosperm outgroup.  The orders are labeled on the branches, as is the family Poaceae and the rice genus Oryza.

Monocots in the human diet

The eudicots are a huge group of plants, constituting 70% of extant plant diversity. Taxonomists call five clades that diverged early in eudicot evolution the basal eudicot orders, of which only one, the Ranunculales, includes something that we commonly eat:  poppy seeds. The more recently derived eudicots are called the core eudicots, most of which are members of two large clades, the rosids and the asterids, each of which is shown in the tree below collapsed to a single colored branch. 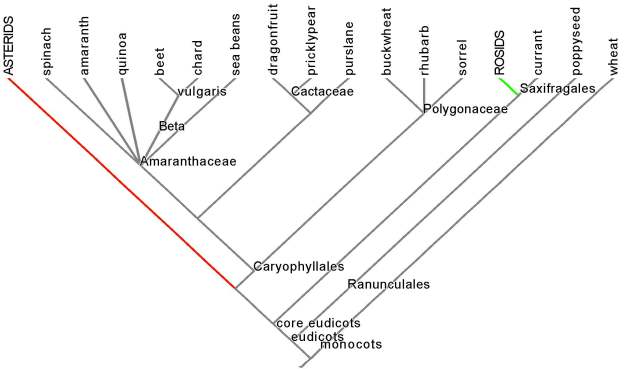 The phylogenetic tree of the food species in the asterids is shown below, with the order Caryophyllales as the outgroup.  Our tree includes three major clades of the asterids:  the order Ericales, and the two large clades named the lamiids and the campanulids.

Edibles in the asterids

The rosids account for a quarter of angiosperm diversity. Three major rosid clades contain food species:  the order Vitales, which includes grapes, and the malvids and the fabids, both of which are huge. 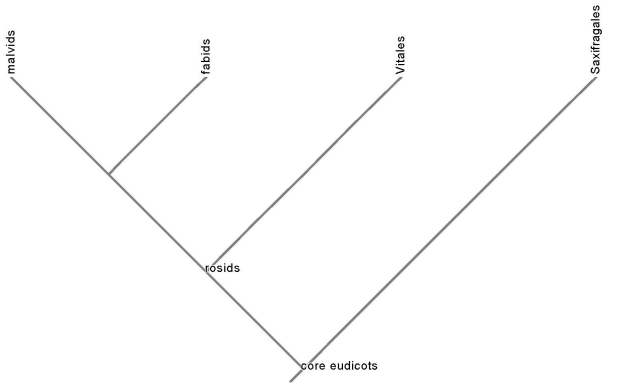 Rosid major clades with food species (Saxifragales is the outgroup)

The tree of the food plants in the Vitales and fabids is shown below (no outgroup).  The fabid clade is named in honor of one of its orders, the Fabales, which includes the large family Fabaceae, the legume family, containing the pulses: beans, peas, lentils, soy.  The legumes are a tremendously important source of vegetable protein on the planet.  Proteins are rich in the element nitrogen, a necessary nutrient for plants and many microorganisms that is often in short supply in natural ecosystems and crops, which is why nitrogen fertilizer is applied to many fields.  Many of the species in the Fabaceae manufacture their own nitrogen fertilizer by forming symbiotic relationships with Rhizobium bacteria that live in special nodules in their roots in order to perform nitrogen fixation: converting biologically unavailable nitrogen gas in the air into biologically useful ammonia. In the absence of industrial chemical fertilizer production, natural nitrogen fixation is the only mechanism by which new nitrogen enters ecosystems.  This is why legume species are often used as cover crops in farming, and why farmers often rotate bean crops with other crops; the legumes naturally enrich the soil with nitrogen.  The Fabaceae, however, are not the only plants that form symbioses with nitrogen-fixing microorganisms.  Several other non-legume tree and shrub species form nitrogen-fixation symbioses with the actinobacteria Frankia.  All of these actinorhizal plants are fabids.  This likely means that the extraordinarily ecologically important capacity to form nitrogen-fixation symbioses evolved early in fabid evolution. The food fabids are shown in the tree below: 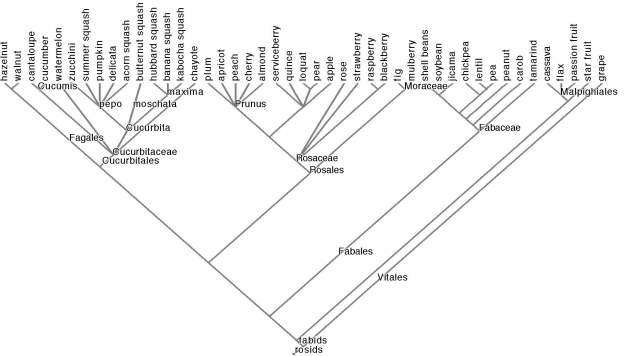 The malvid tree finishes our whirlwind tour of the food plant tree of life! 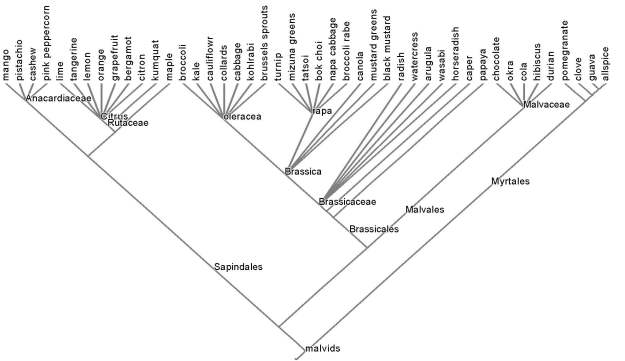 There are 172 species on our initial list of plant species in the human diet.  Though hardly an exhaustive list, it certainly includes the plants primarily responsible for feeding the global population.  Even if the number of species on this list were doubled or quadrupled it would still only represent a miniscule fraction of the estimated 315,000 plant species on the planet.  This small sample nonetheless is spread across most of the major clades on the plant tree of life.  Every branch has a story, something consequential for the species in its clade.  Keep reading the blog as we upack this rich history of our food plants.