Of sweet potatoes and putting down roots

On a hunt for a traditional Thanksgiving tuber, Katherine discovers what it takes to root your own sweet potatoes.  Here she explains how sweet potatoes are put together, which anyone can observe in the kitchen.

The Sunday before Thanksgiving – the first Thanksgiving in 19 years that I have not spent with my family in Georgia – I was on a hunt for sweet potatoes.  Not a single one of my favorite vendors at the Mountain View farmers market grew them this year.  Finally, I questioned Luis Miranda of Wholeness Farms, who has always given me clear and patient explanations of many aspects of farming.  In his charming Nicaraguan accent, he simply said that sweet potatoes are a “long crop.”

Sweet potatoes of all kinds – orange, white, or purple, garnets, Beauregards, Georgia jets, and white stars – are members of the species Ipomoea batatas, in the morning glory family, Convolvulaceae.  I. batatas is closely related to morning glories (Convolvulus), and to the beautiful night-blooming moonflower 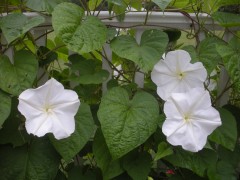 (Ipomoea alba), pictured here.  I. batatas itself can be found in inky purple, green, and variegated ornamental varieties.

Sweet potatoes vs yams
It is traditional this time of year to trot out a statement about the difference between sweet potatoes and yams.  Just this Wednesday morning, a caller to our local public radio station asked a panel of chefs to sort it out.  They could not, but everyone from Mark Bittman to Hal McGee to Alice Waters has at some point described the essential differences:  yams (Dioscorea species) are (1) only distantly related to sweet potatoes, (2) very important in Nigeria and other West African countries but hard to find in the US, and (3) starchy and may weigh (literally) as much as a normal adult human.  In the face of so many high-profile admonitions, the continued use of both names must be based on more than ignorance.  Maybe it’s just that people can’t give up the assonance of “candied yams.”

We botanists can add a little something to the usual chef’s story by providing a phylogenetic tree illustrating the evolutionary relationship.

Another interesting but little-noted distinction is that, as far as I know, sweet potatoes have absolutely nothing to do with either the spread of malaria or the evolution of sickle-cell anemia.  A strong case has been made, however, that the cultivation of true Dioscorean yams in southern Nigeria over the last 2000 years opened up the forest and created the perfect standing-water habitat for malaria-carrying mosquitoes, which in turn favored the spread of the deadly genetic disease sickle cell anemia in the region because sickle cell carriers (heterozygotes) are immune to malaria (Durham 1983, 1991).  If anyone at your Thanksgiving day table dares to call your sweet potatoes yams, you can probably silence them with this not-so cheery, but fascinating, story.

Sweet potato structure
In addition to stumbling over the name, people sometimes confuse themselves about which plant part makes sweet potatoes.  Sweet potatoes (and yams for that matter) are properly called root vegetables because they are root tubers.  They are swollen storage structures derived from roots.  By contrast, white potatoes (Solanum tuberosum) are stem tubers, and a topic for another post.  Admittedly, sweet potatoes do not look like roots.

They are not tap roots, fat at the top and tapering to the bottom like carrots, parsnips, beets, and turnips.  It can even be difficult to tell which end of a sweet potato is the “top” because a sweet potato plant does not make one large main root but may develop several tubers from its lateral roots.

Fortunately, the tuber gives clues to its orientation, which anyone can investigate while preparing Thanksgiving dinner.  Along the tuber are tiny side roots emerging from wide horizontal scars in its skin.  Similar side roots can be seen on very fresh carrots or beets.  In sweet potato, these side roots fall into parallel lines running the length of the tuber, whereas they tend to be scattered in most other species, including carrot.  (A fundamental difference between roots and shoots is that branches are arranged regularly around the stem, usually in a spiral, whereas side roots are generally random.)

Side roots often point towards the distal end of the tuber, the end growing away from the rest of the plant.  At the other (proximal, or top) end, some individual tubers will have developed tiny buds.  These buds will develop into “slips,” or new shoots, which Luis explained was the secret to cultivating sweet potatoes.

The “top” of the sweet potatoes, showing buds where new shoots (slips) will originate

The inside of a sweet potato is also worth investigating before you cook it.  It is a storage organ, and like many other storage tissues, it is composed of large cells filled with sugars and starch.  Orange varieties are also full of the pigment beta carotene, a precursor to vitamin A.  A serving of less than 100 Kcals provides nearly a day’s worth of vitamin A and a good dose of several B vitamins to get you through the holiday stress.

The fun part about raw sweet potatoes, though, is that you can squeeze milk from them.  They are shot through with laticifers, basically long narrow cells full of milky sap called latex.  This is the same kind of sap visible on the cut surface of a dandelion stem or a freshly cut head of lettuce.  If you squeeze a sweet potato tuber right after slicing off an end, you will bring the sap to the surface.

Squeezing a cut sweet potato brings white latex to the surface and shows where vascular tissue is located.  Click to enlarge.

Because these laticifers are associated with the vascular tissue (veins), they allow you to see that sweet potatoes develop randomly scattered clusters of veins, as well as a ring near the outside of the tuber and a large cluster in the center.  The veins are also associated with fibers, which my grandmother used to remove from mashed sweet potatoes by beating them with a mixer.  The fibers wrap themselves around the beaters, leaving behind a smooth fluffy puree.

Cultivating your own sweet potatoes
Luis was the one who told me about slips, the little shoots produced at the top of each tuber.  What makes sweet potatoes a “long crop” is that they take several months to produce slips in the ground, which then must be divided, rooted, and replanted.  As vines, they take up a lot of space on the ground for many months before harvest.  No wonder many farmers don’t bother.  I will definitely be rooting my own sweet potatoes this year, though.  Following the collective wisdom of the internet, I will cut one of the tubers about one-third of the way from the top and suspend the cut end in water using toothpicks.  [Update: I will be following the advice of commenter Christina, who recommended using whole tubers, to avoid rot.  She also notes that store-bought tubers are often treated to limit slips, so farmers market tubers may be more successful.] The bottom should develop roots while the slips grow out into viney shoots.  Once they have developed several leaves, I will remove them from the tuber, place them in a vase, and allow them to develop their own roots.  In the spring I should be able to plant them outside.  Meanwhile, I will use the rest of the sweet potatoes to start my own new Thanksgiving tradition, stacks of alternating slices of sweet potatoes and parsnips, painted with browned sage butter, and baked until tender.

The stacks, painted with sage butter and roasted

Whatever you plan to do with your I. batatas  this year, we at the Botanist in the Kitchen wish you a very happy Thanksgiving. 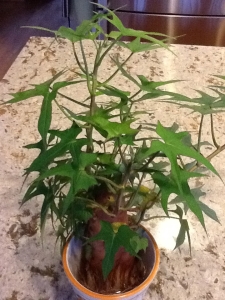 23 responses to “Of sweet potatoes and putting down roots”