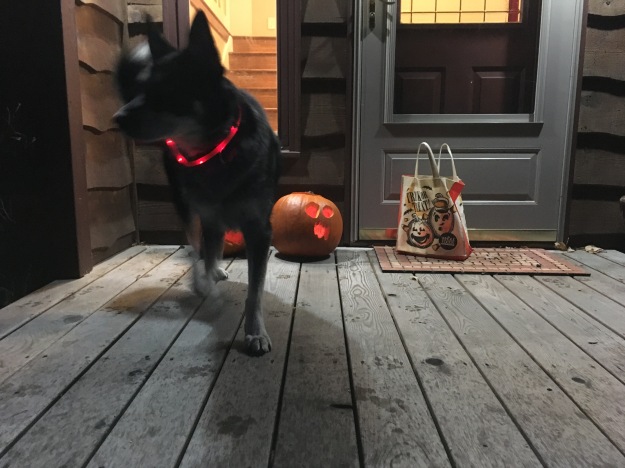 The first Jack-O-Lanterns were carved out of turnips in 17th-century Ireland. While the large, starchy hypocotyls (fused stem and taproot) of cruciferous vegetables are anatomically fascinating, this post will be about the stuff you are more likely cutting through to make a modern Jack-O-Lantern out of squash.

What species is your pumpkin?

Before you cut into your pumpkin, you may want to identify its species and variety, which may influence your decision about what to do with your Jack-O-Lantern after it has served its Halloween duty (see below). Almost all of the squashes and gourds grown or bought in the United States (or elsewhere, for that matter) come from five closely-related species of the genus Cucurbita (see our squash diversity post for details). The three most common species—C. pepo, C. moschata, and C. maxima—all have varieties (or subspecies) that include the word “pumpkin” in their common names. Most Jack-O-Lanterns, mini pumpkins, and “pie” pumpkins are varieties of C. pepo, which also includes zucchini and other summer squash, acorn, spaghetti, and delicata squashes. The butternuts, varieties of C. moschata, boast Seminole and Long Island Cheese pumpkins, among others. Commercial canned pumpkin, giant pumpkins, Amish pie pumpkin, and most of those unusually-shaped or colored novelty pumpkins are all varieties of hubbard squash, C. maxima.

A pumpkin is a fruit. Specifically, it’s a pepo, a hard-rinded berry that develops from a flower with a single inferior ovary. “Inferior” means that the squash flower ovary is located within the hypanthium, the tissue that supports the petals and sepals (see our pomegranate and apple essays for a few other examples of fruits with inferior ovaries). The round brown circle on the bottom of the pumpkin is the scar left after the petals and sepals fell off the developing fruit. As the fruit develops, the hypanthium tissue fuses with the outer wall of the ovary to become the exocarp rind, encasing the firm flesh of the mesocarp and soft endocarp. When you scoop out the stringy, gooey stuff and seeds from inside the pumpkin, you’re scraping out both the endocarp and the placental tissue that that connects the seeds to the ovary wall. The cavity of your pumpkin might look like it has lobes to it, called locules.

Observe the size, shape, and color of your pumpkin. Dozens of genes control the color and shape of squash fruit (Paris and Brown 2005, Paris et al. 2012). A white pumpkin, for example, expresses dominant alleles (gene variants) of two genes: Wf for white flesh and W for weak fruit color. A warty pumpkin has a dominant allele of the gene Wt. The traditional orange pumpkin has the right alleles for many genes responsible for the synthesis of orange carotenoid pigments, especially lutein and beta-carotene, and the “orange” gene Or encodes an enzyme that directs the differentiation of specialized plastids in fruit cells called chromoplasts in which those carotenoids accumulate (Wyatt et al. 2015).

I start the pumpkin carving by cutting out the lid around the “handle,” which is really the peduncle, the specialized stem that connects first the flower and then the developing fruit to the main plant stem. The peduncle is woody because it is infused with lignin. Incidentally, making those handles better is an active area of pumpkin breeding efforts. We pick summer squashes for eating when they are very immature and tender. If left to fully mature, however, the summer squash fruit would also become lignified, like a bottle gourd, much harder than the shell of a ripe pumpkin, which is not lignified. The non-lignified mature fruit of pumpkins and other squashes that are used for their edible mature fruit is due to a recessive allele of a single gene, hr. We would find Jack-O-Lantern—or dinner—preparation much more difficult if we had to cut through lignified tissues (Paris et al. 2012).

While we’re on the topic of woody tissue on the outside of the pumpkin, you might notice some areas pebbled with a rough, tan-colored callus. This is called induced lignin-like material and is the squash’s response to wounding or pathogen attack. You may see this most prominently where the squash was laying in contact with the ground, where it would experience the highest fungal attack.

Save the seeds! It’s a bit of a pain to separate the gooey fruit from the seeds, but salted and roasted pumpkin seeds is a real treat. Crack the hard seed coat (testa or integument) to reveal the olive-green-colored cotyledons (leaves) of the embryo, which take up most of the seed. The rest of the embryo is in the pointy end of the teardrop-shaped seed.

You can, of course, eat your pumpkin Jack-O-Lantern. The most common large Halloween carving pumpkins are varieties of C. pepo that are not bred to be the best tasting squash, though, so while it would be a shame to let it all go to waste, you may end up with a lot of relatively bland and perhaps stringy cooked pumpkin. If it’s stringy, it’s because your pumpkin shares the same alleles for a single gene, sp, as spaghetti squash, which is somehow involved in the formation of pectin bands that dissolve during cooking, leaving strings. Fear not, though. A blender will fix all your squash texture woes.

If you happened to carve a “pie pumpkin” variety of C. pepo, though, you probably had a tiny Jack-O-Lantern, but you’re well on your way to a delicious post-Jack-O-Lantern meal, after your Halloween creation has been roasted, steamed, or boiled. I have personally found, however, that “pumpkin” varieties of hubbard and butternut squashes (C. maxima or C. moschata) have thicker and denser flesh and make the best pumpkin foodstuffs. Regardless of the species, though, time since harvest will affect winter squash sweetness and flavor. At maturity the squash is full of starch, but as time passes after harvest, enzymes convert the starch to sugar to fuel respiration of the still-living squash cells and seeds, and the pectins between cells break down, softening the fruit (as we discussed in the cranberry post). This is why a “curing” period is recommended after winter squash harvest, to sweeten and soften it a bit. 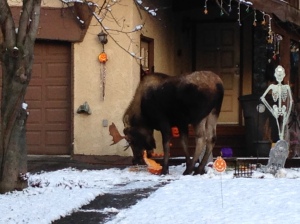 I hope to cook our Jack-O-Lanterns after the trick-or-treaters are done admiring them, so to avoid rot or freezing, I’m going to wait until this weekend, a few days before Halloween, to carve our pumpkins. They have been patiently curing in the garage. In our Anchorage neighborhood, though, there is a very good chance the moose will get to them before I can retrieve them. They’d go for a turnip, too.

Happy Halloween/Samhain to all of you, and the moose.

7 thoughts on “Botany Lab of the Month: Jack-O-Lantern”