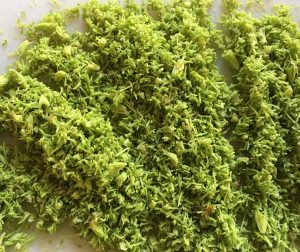 Most of this blog is dedicated to the biology of domesticated food plants that you typically find in a grocery store instead of in the wild, but we make the occasional exception for our favorite feral edibles. Some of these are commercially viable and end up in the grocery store or restaurants anyway, or they otherwise straddle the line between cultivated and wild. Okay, the list of our posts on food plants that are at least sometimes wild harvested is actually pretty long: coconuts, maca, carob, walnuts and pecans, bamboo shoots, elderberry, maple, onion-y ramps, blueberries, cranberries, and lingonberries, rapunzel, mulberries and figs, strawberries, and some greens. Spruce tips are now a popular beer ingredient, so I suppose they fall into this semi-commercial category, too.

Regardless, spruce tips are easy to collect in the spring, and they make for fun edible projects. Also, kids can eat them straight off the tree, so for the 5 minutes it captures their attention, it can be a family endeavor. The kids definitely will eat spruce tip shortbread (recipe below). This is the first year I’m trying spruce tip salt (recipe below), which I’m told is pretty amazing on roast veg. Folks here also like drying the spruce tips for tea, pickling them, or making them into jelly.

A spruce tip is an immature shoot, complete with needles (Owens and Molder 1973). It is an entire compressed branch, analogous to the telescoping shoot of young asparagus or bamboo shoots and structurally similar to cabbage and Brussel’s sprouts. Picking a spruce tip removes all of this year’s growth for that particular small branch and neuters its capacity to grow outward from that particular point. Be mindful, then, about how many tips you take from a particular branch or tree.

The best time to collect spruce tips is shortly after bud burst, when the needles are still tightly bound together. In this stage the needle tips may still be encased in a papery scale. 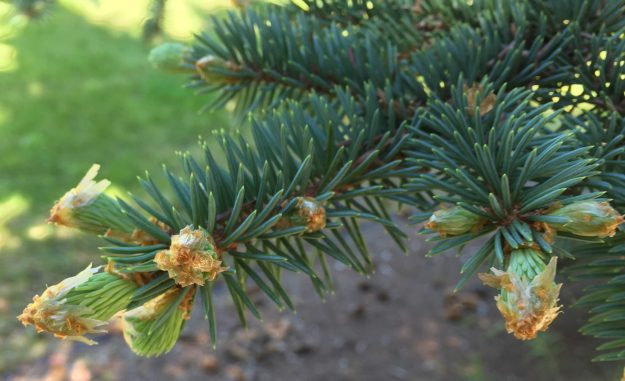 The scale is actually composed of many overlapping individual scales, which are modified leaves that protect the developing bud over the winter (see the microscope image below of the scales covering an overwintering bud). They are similar to the papery modified leaves covering onion and garlic bulbs.

The immature stem and needles are soft and pale green. Lignification (growing tough wood fibers of cellulose and lignin) hasn’t yet begun (Polle et al. 1994), nor has the hardening of the cuticle. Both the epidermis and the inner leaves are still quite immature. Cellular expansion won’t be complete for several more weeks. They have a high water content relative to mature stems and needles, and green chlorophyll-filled chloroplasts are still developing (Hatcher 1990). See the microscope cross-sections below of immature and mature spruce needles to see the loose, thin structure of the new shoot and the low concentration of chloroplasts. 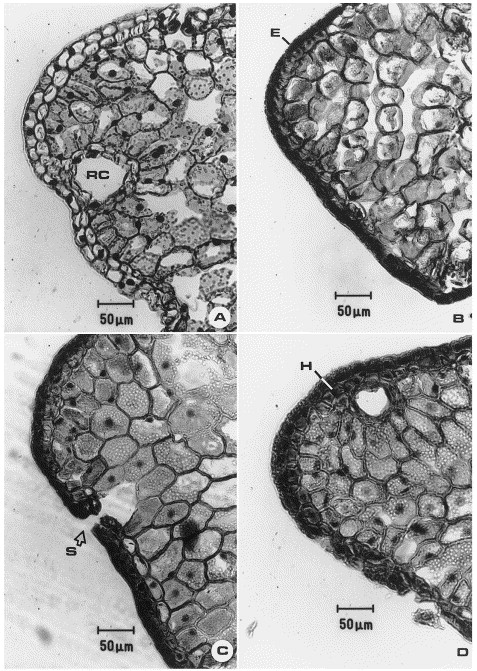 Spruce tips are often described as “lemony.” While they are full of terpenes, including citrus-scented limonene (Puchalska et al. 2008), I think most of this “lemoniness” has to do with their sharp tang. The tang comes from their high content of organic acids, including ascorbic acid (vitamin C) (Polle et al. 1996). Vitamin C is part of a robust antioxidant and protective suite of chemicals that protect the developing leaves before the epidermis takes over that job. I think they have a bit of an astringent flavor, too, which is from their high concentration of phenols (tannins) (Puchalska et al. 2008).

If you don’t have locally available spruce (genus Picea), fear not. Newly emerged branches of some fellow conifers (gymnosperm family Pinaceae; see our Food Plant Phylogeny page for a description of what this means) will work just fine, too, including: pines (Pinus), firs (Abies), Douglas fir (Psuedotsuga), and hemlock (Tsuga). Not all conifers are safe to eat, though. Yew (Taxus), for example, is deadly poisonous. I think it’s crazy that it is a common landscaping plant. Note here that the conifer hemlock in the genus Tsuga that I just said is safe to eat is different from the plant called “poison hemlock” (Conium maculatum), which is the herbaceous plant in the family Apiaceae (carrot family) that killed Socrates. 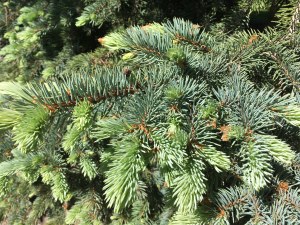 Also, you’ll find you have distinct preferences for the aroma and flavor of different species. White spruce (Picea glauca), for example, is one of the common spruce species around here and is, in my opinion, the least desirable from a culinary perspective. One of the ways to identify it in the field is to crush a needle and see if it smells, like, well, cat pee. It’s perfectly safe, and I can’t figure out which of the compounds in its essential oil or hydrosol (Garneau et al. 2012) are responsible for the unfortunate pungency, but you may want to keep your species separate while you figure out which ones you prefer. I actually didn’t have a problem with the white spruce tips until they were a bit older and I used them in spruce tip salt. We’ll see how it turns out, and I’m definitely going to specifically try black spruce or Sitka spruce next year.

Full disclosure here about these shortbread cookies: I genuinely think they’re delicious. My kids said they’re good, and they don’t shy away from pointing out culinary failures. Other grown-ups also claimed they liked them. Before he realized the joke, though, my husband bit into one and asked: “What are these made out of? Twigs?” This recipe is adapted from the NY Times basic shortbread recipe. The addition of cardamom and orange zest was the innovation of Rosey at Jerome St. Bakery

Treat the ingredients like biscuit dough: either incorporating the butter into the rest of the ingredients by hand with a pastry cutter or butter knives or your hands, or by mixing it all in a food processor or stand mixer (with paddle attachment) until it is still a little crumbly, just before it becomes a solid dough ball (although I’ve done this, and it turns out fine). You can pat the dough into a 9-inch baking pan (to 1/4-inch thickness) or hand-roll it into a log and slice it into 1/4-inch cookies before baking in a 325-degree oven for 35-45 minutes (until golden brown). I prefer the latter option. If you do pat it into a baking pan, cut it into bars or wedges while it’s still warm.

Blend an equal volume of salt and spruce tips in a food processor. Spread the mixtures out to dry on a piece of parchment, or let it dehydrate in a dehydrator or warm oven. It will keep best in the freezer after it’s dry.